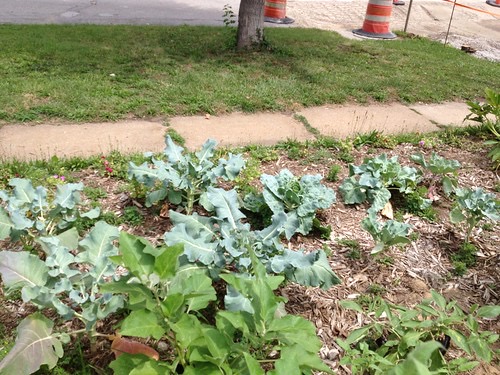 (Originally published in January 2014, following an experiment the previous summer)

Here’s an email I received last September from a friend of mine who was interested in trying out electroculture:

“This summer I planted a vegetable garden in my front yard. I planted tomatoes, eggplant, broccoli, peppers, and chard. I wanted to to try David Wechsler’s “electric fertilizer” concept, so I constructed a crude magnetic field generator: an old Samsung phone charger with a 5v, 550 ma output, connected by lamp cord to two three-inch nails, one connected to each wire of the charger. I buried the nails, upright, some distance apart, just below the ground in the center of the garden, and plugged the charger into an outside 110v plug. The garden is about 25 feet by 14 feet. The long axis is east to west. The nails were positioned on the east and west sides.
I was surprised at what a strong effect the electrical fertilizer unit had on my garden. This was especially noticeable with the tomatoes. The tomatoes near the field generator grew much larger and ripened a good week or more earlier than the distant ones. This also happened with the broccoli and eggplant. The plants nearest the field generator grew noticeably bigger and ripened much faster than the more distant ones.
Now, at the end of the season, this effect is still visible. I am picking all the last ripe tomatoes from the plants nearest the electricity.
So I was impressed, and I intend to use this system again next year. I am thinking that something a little more professionally constructed than a phone charger, lamp cord, and nails might be nice”.
– Bill Perry, St. Louis, MO

Here’s a picture of what the garden looked like before the electric system was installed:

Bill’s garden a few weeks later.  Note the two sets of plants beyond the walking path.

You can see that the row of plants closest to the path is taller than the rows further away..  This is due to the fact that the electric field is originating next to the path.  As the field diminishes over distance, so does the growth amplification effect.

This photo shows how the broccoli plants to the lower right are larger than the ones moving left-ward. The positive electrode is about 8 feet away to the right from the largest plant in the center.  It’s interesting to note that as the electric field diminishes over distance, so does plant height and leaf area.

The effect can also be seen on his tomatoes…. Here are some pics depicting the average differences in size, based on distance away from the electrodes:

Interested in seeing similar results yourself?  Explore our site to learn more or check out the store!